In the patterns they foresaw the sun's death. They warned us. We ignored them. Now, they've come to foist penance upon us.

Members of the Hive are fortune tellers, oracles, and doom-sayers. They claim to have seen the path to the brightest future, and they are not afraid to force others to follow that path, or deny them a future of any kind if they resist.

The Hive knew about the threats that lurked in the Dusk. They peered across the boundary and saw what was waiting for the chance to close in on us. In their own ways, they tried to divert the inevitable disaster, cursed with knowledge and fear of impossible truths. Maybe if we worked with them, heeded them, believed them, their solutions would have worked. Now we'll never know what could have been.

Gifted with powers of foresight and premonition, every enemy from the Prophetic Hive uses a unique keyword, PORTENT. Enemies with Portent declare their intended actions at the start of each round, declaring the path destiny has laid out for them. But, if the Sparks try to change the future and cause an enemy to be unable to perform its declared action, the enemy instead randomly uses one of several possible "Variable Future" actions. Defy fate at your own risk.

This document includes 4 all new enemies, with several possible variants, plus a new Elite, the QUEEN-ORACLE!

You can download a text-only version of the Prophetic Hive right now for free, or you can purchase the full version with cool layout and artwork! All support and sharing is immensely appreciated, and if you end up using the Prophetic Hive in your NOVA game, be sure to let me know at @jollaffle on Twitter or right here on itch!

The Prophetic Hive was an entry in the NOVA Jam! Be sure to check out the other awesome submissions and start exploring the dangerous Dusk!

Written and Designed by Aaron Jolliffe (@jollaffle). Created for NOVA by Spencer Campbell (@GilaRPGs, gilarpgs.com). This product is in no way affiliated with Spencer Campbell or Gila RPGs.

In order to download this NOVA faction you must purchase it at or above the minimum price of $4 USD. You will get access to the following files: 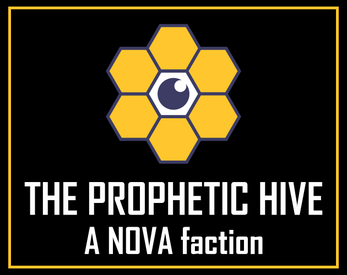